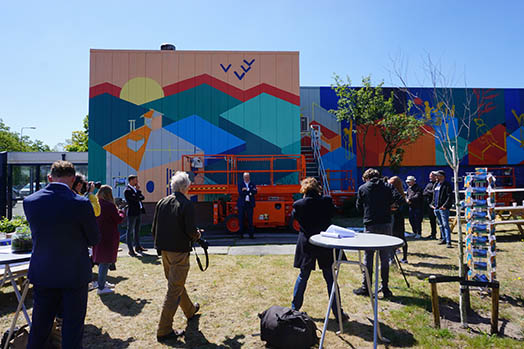 A stone’s throw from the Tramkade with the painted grain silos is the Grasso’s building, which has been decorated with a large colorful wall painting since May 18. Kings of Colors executed this gigantic work of art. Three students from the Academy of Art and Design signed St. Joost for the design.

The mural shows characteristic properties of the building, such as the stained glass. In addition, the various logos that Grasso has had over time have also been incorporated. The company was founded in 1858 and gained national fame with the manufacture of machines for the margarine industry. Later on that was transferred to the production of chillers and compressors. The design of the mural is made with current digital techniques. Those new techniques are now combined with the classic graffiti art. And thus symbolizes the future of the site where it also revolves around connection, cooperation and innovation. 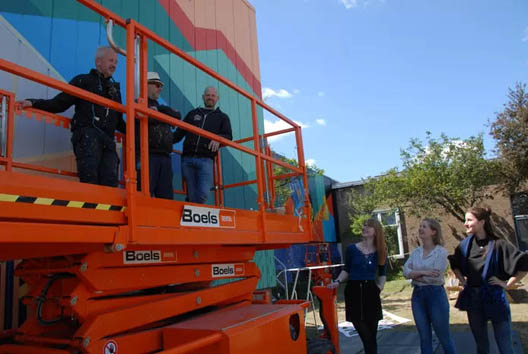 “This is the chronological story of the Grasso building, which dates from 1913. If you look from left to right, you will see a complete timeline with typical features, including the various logos that belonged to the company. Authentic lathe with gears, a wire telephone, a cooling machine, a laptop to a graphic representation with bits and bites and of course a mobile phone. The connection, cooperation and innovation are the common thread”, thus Ivy Kneppers together with Annelie Martens en  Floor Rebbers responsible for designing the mural.

“This artwork not only makes you happy, it is also inspiring. The common thread fits perfectly with this area of development. The renovation of the Grasso building is the first step. Later it will be the turn of the EKP Noord, together with the construction of the intended residential towers and a new art academy. The dynamics will start, mind you!“, adds Alderman Jan Hoskam.